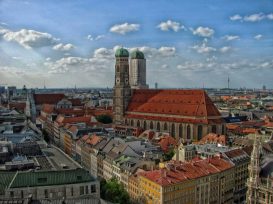 Munich, located in the historic Bavaria, is a beautiful German city with an estimated population of 1.5 million people. The Bavarian capital, mostly known for its annual beer celebration festival, the Oktoberfest (dating back to the 16th century), is home to century-old buildings and several museums, including the BMW museum and also the Munich Residence. In addition, Munich is home to the football super-team FC Bayern Munchen (Munich), the winners of the 2012-13 Champions League. This beautiful German city, just like Berlin, has been used by many filmmakers as a filming destination. In this article, we are taking a look at 6 movies filmed in Munich. Find out which is the latest movie shot in Munich, Germany below. This iconic Steve McQueen film is one of the first movies filmed in Munich. The three hour-long masterpiece follows a group of allied prisoners of war who are trying to plan a “great escape” from their prison camp. The Great Escape was entirely filmed in Bavaria with a large set that resembled the Stalag Luft III being built in Munich. Although the first part of the film is quite comedic, the second part is action-packed and it unjustifiably deems The Great Escape as one of the best films ever made. Downfall, one of the best historical films ever made, explores the story of Adolf Hitler’s final days in his bunker during the end of World War II as told by his last secretary, Traudi Junge. The historical film was shot in Berlin, Saint Petersburg (Russia) and also Munich, in an enormous set which included a huge replica of Hitler’s bunker. Finally, Downfall was nominated for an Academy Award for Best Foreign Language Picture but to everyone’s surprise lost to Alejandro Amenábar’s “The Sea Inside”. The Three Musketeers, one of the many movies filmed in Munich, was entirely shot in Bavaria. Based on the famous Alexander Dumas 19th century novel of the same name, the film features a great ensemble which includes Orlando Bloom, Logan Lerman, Milla Jovovich, Mads Mikkelsen and Christoph Waltz. The Three Musketeers was filmed in several Bavarian cities, including Munich, Bamberg and also Würzburg. Finally, despite its talented cast and source material, the film was a disappointment that was partially saved from the $132 million worldwide gross on a $75 million budget. This movie based on the life of the most famous whistleblower in history, Edward Snowden, is one of the many movies filmed in Munich. The underrated 2016 film, directed by Oliver Stone and starring Joseph Gordon-Levitt(Snowden), tells the story of how the NSA’s illegal surveillance methods were leaked to the public by Ed Snowden, a former employee. The movie was filmed in several locations across the world including, Hong Kong, the US and Germany. In Munich, Snowden filmed in Olympiapark and in Postpalast(the CIA base in Switzerland) as well as in Tutzing (lake party scene) and in movie studios. Finally, Snowden is a must-watch film as it accurately depicts most of Ed Snowden’s life and actions. Look Who’s Back is a hilarious German film that finds Hitler waking up in 21st century Berlin. After reading about modern Germany, the disappointed Hitler decides that he was sent back for a reason and sets to continue his work. Written and directed by David Wnendt, Look Who’s Back is a hilarious, disturbing yet necessary film that reflects on the modern German society. The film was shot in several cities across Germany including Munich. Finally, the film is available on Netflix for those that want to see Oliver Masucci’s stellar performance as Adolf Hitler.

Several other films have been shot in Munich either in studios or on location so we decided to name a few.

This 1977 horror film written and directed by Dario Argento follows a woman named Suzy Bannion who decides to go to Germany and perfect her ballet skills, only to find out that something sinister is happening to her school. Furthermore, filming locations in Munich include the famous Hofbrauhaus restaurant and the Königsplatz square.

Despite popular belief, the 2006 Best Picture nominee was not filmed in Munich but instead was filmed in Budapest.

This 2015 Emma Watson romantic thriller filmed in several locations across the world, including Luxembourg, Argentina and also Munich, Germany.

Enjoyed this article? Why not take a look at 5 Movies Filmed in Warsaw, Poland?