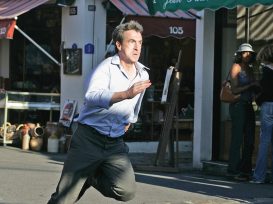 District B13 is one of the best French action movies directed by Pierre Morel who also directed Taken starring Liam Neeson (we know what you’re thinking and yes only the first one). This action movie is set in 2010, in a futuristic Paris were the worst ghettos and neighbourhoods of Paris are sealed off by a huge wall from the rest of the city. In addition, this movie follows an undercover cop and ex-criminal who try to infiltrate a B13 gang to defuse a neutron bomb. Finally, Brick Mansions, one of Paul Walker’s final movies is based on District B13. Taxi is a 1998 top French action movie (action-comedy) that stars Samy Naceri, Frédéric Diefenthal and also the stunning Marion Cotillard. The movie follows Daniel (Naceri) a pizza boy from Marseille who finally has his dream come true by getting his taxi license. Daniel is a devil behind the wheel and eventually is caught for exceeding (to put it mildly) the speed limit. He is now forced to chauffeur a schmuck police inspector around to catch some German bank robbers. Taxi is a clever French action movie which paved the way for three more Taxi movies. In the latest Taxi movie released in 2007 famous soccer player Djibril Cissé is featured as a homage for signing to Olympique de Marseille from Liverpool FC. La Femme Nikita is a French action movie written and directed by Luc Besson. This top French action movie follows convicted felon Nikita (played by Anne Parillaud) who avoids jail by becoming a top secret spy and assassin. This action movie was nominated for a Golden Globe for the best foreign language film but ultimately lost to Europa Europa. Successful US TV-show Nikita that ran for 4 seasons was based on this French action movie. Tell No One is French action movie based on Harlan Coben’s novel of the same name and directed by Guillaume Canet. The movie stars François Cluzet as Alexandre Beck, a paediatrician whose wife was brutally murdered eight years ago in a case were Alexandre was a prime suspect. After two bodies are discovered at the same place were his wife’s body was found, Alexandre is a main suspect for the second time. We don’t want to spoil the action movie so we are not going to reveal more, but this is our pick for the top French action movie of all time. Fun fact: this french action movie grossed 33 million dollars internationally with 6 million of that in the US.

The Professional is a great French action film starring Jean-Paul Belmondo, Jean Desailly and also Cyrielle Clair. The movie follows a French secret agent who returns to Paris after his imprisonment to settle some old scores. In addition, this is one of the best French action movies that features a rating of 7.7/10 on IMDb.

This top French action movie stars Alain Delon a cop named Choucas, who is wanted for the murder of two people and is being looked for by every policeman in town. Finally, For a Cop’s Hide features the unforgettable song “Bensonhurst Blues” by Oscar Benton, so this French action movie had to make our list!

Enjoyed this article? Why not take a look at the Top 10 Mafia Movies Of All Time?